The leaves have certainly been dancing quite a jig in my garden over this past week!    The magnificent Elm tree in the garden provided the most leaves for this party.

My elm is huge and old and unfortunately has suffered some strong wind damage in the years that we have lived in this house.   Thankfully, I have an arborist who loves this tree almost as much as I do and he sees to it that it’s in the best shape it can be.   Edmonton, the city where I live, has one of the largest (if not the largest) populations of elm trees in the world.    To protect its elms and keep Dutch Elm Disease at bay, the City of Edmonton has strict rules regarding the care and pruning (only permitted between October 1-March 31) of city trees as well as those on private property. 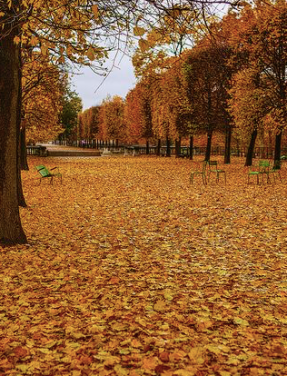 *** Dutch Elm Disease (DED), first discovered in the Netherlands in the 1920s,  affected trees throughout Europe and North America. The elms (over 30,000) that Paris planted in the 1600s  along its elegant boulevards were almost all wiped out by DED at that time.  There are only about 1,000 elms left in Paris today.  Since then, the city of Paris has planted London Planes and Chestnut trees to provide the beautiful canopies you see along the endless promenades and parks.  Unfortunately, these trees are now under attack by Canker Stain that is threatening to destroy the beauty we love to see in Paris.

These are the elms along The Mall in Central Park in New York City.  I had the opportunity to walk through Central Park last October and thoroughly appreciated these elms and all their autumn magnificence!

Looks like I got sidetracked…so back to Fall Gardening!!!

Cutting back the roses in the fall is almost heartbreaking…especially if they are still blooming. After the first heavy frost is the time to remove faded flowers, deadwood and any crisscrossed branches in the middle of the plant.  Tall stems should be cut back to avoid breakage to the rose caused by heavy snow and winds.  I cut my tea roses branches back to about a foot high and so far have had success with the following year’s growth.   The vertical branches of climbing roses should not be removed, however, the lateral branches can be.

Now that most of the leaves have fallen, I have run the lawnmower over them and mulched the roses with the chopped up leaves.

One of my last jobs in the fall is wrapping burlap around the boxwood hedges.  This adds protection against cold northwest winds and burning caused by the sun’s reflection of the snow. 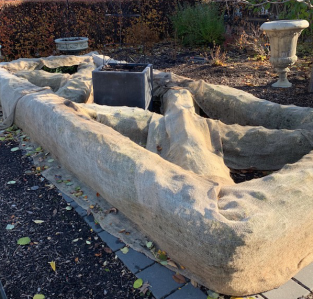 Although we may not be looking forward to the cold and snowy months ahead, the garden is ready for whatever weather lays ahead!